Violin and Bands for Hire

​*I usually recommend a minimum of a duo for most gigs, for example, guitar and violin. It allows the musicians to better fill the space with the ambiance that you are looking for. There is nothing like having the real acoustic instruments in your presence.

Performing solo violin for 5000+ baseball fans at the Park in the Park at Petco Park before a Sunday Padre game. One of many, I loved these gigs.

Acoustic Evenings at The Athenaeum

Acoustic Evenings at the Athenaeum Last night, I went to the final concert in the Athenaeum’s “Acoustic Evenings at the Athenaeum” series, featuring Madera, a group with an interesting, genre-transcending sound; singer-songwriter Jane Lui; and singer-songwriter Jenn Grinels.  The experience was really different from any other Athenaeum concert I had been to before; the intimidating atmosphere of the concert halls that I remember from my younger years dissolved into the comfort of the Library’s Joan and Irwin Jacobs Music Room.

I got to the Athenaeum as soon as the house opened (7:00, half an hour before the concert began).  I caught a glimpse of Adam Ainsworth, Madera’s violinist, warming up with some burning licks as I staked out a good seat.  I then watched as Ms. Lui sound-checked her glockenspiel and music box, two surprisingly unconventional devices that she used in her performance to great effect.  Before the show, I heard a man in the audience ask a woman near him:
“Is this the first one you’ve been to?”
“Yes.”
“They’re good – really good.”
This actually happened, and I’m happy to say that after the concert was over I was just as enthusiastic about the Acoustic Evenings Series.

Soon after, 7:30 arrived – time for Jefferson Jay, the night’s MC, to introduce the show.  He began with an amusing monologue about his search for an opening act (the opening act turned out to be a song written and played by Jefferson himself) and showed the audience his latest acquisition: a pair of the world’s largest pants.

Naturally, this was a hard act for Madera, the night’s first scheduled performers, to follow, but they did so admirably.  Their songs fused Spanish and Latin American rhythm and harmony with hard-hitting, American sensibilities, and their driving rhythms were so infectious that the woman seated next to me was enthusiastically drumming on her legs throughout the performance.

Next up was Jane Lui, who, despite an early disclaimer about her not being “opera material,” wowed the audience with her soaring, breathy, and almost ethereal vocals, as well as her imaginative performances (glockenspiels and music boxes, anyone?).

The concert concluded with Jenn Grinels’s soulful vocal performance.  She interspersed her original tunes with charming banter, and the audience loved it!  To the performer’s delight, several people yelled things like “Nailed it!” and “That was great!” when she finished a song.  Her final song, an encore, was a killer cover of Aretha Franklin’s “I Never Loved a Man (The Way That I Love You)”

In short, the Acoustic Evenings at the Athenaeum series offered me an intimate, comfortable musical experience – one unlike any I had encountered with the Athenaeum before, and I’m looking forward to the next season!

For audience members interested in further information about the artists and their performances (song names in quotes are based on introductions, and all songs are assumed to be written by the performers unless otherwise specified):

Madera will not be performing any upcoming concerts due to guitarist/vocalist Andre Elias’s traveling to Seattle to pursue a PhD in Ethnomusicology.

Jane Lui will be performing at Lestat’s on July 31st.

All artists have CDs available.

Here are some past examples, new ones are on the horizon:

A classy addition to any wedding or private party! 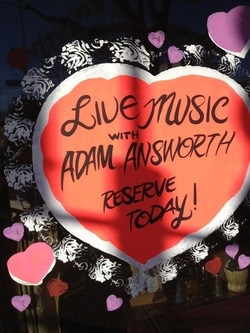